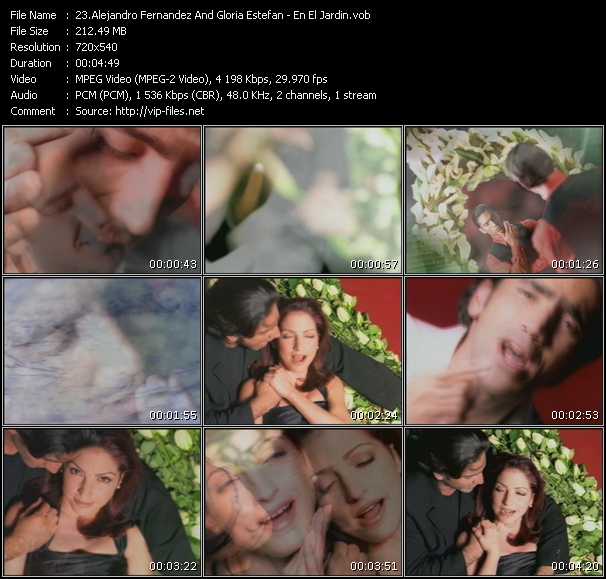 Other Latin-Music Videos of Alejandro Fernandez

Gloria Estefan is an American singer, songwriter and actor with Cuban roots. She was born September 01, 1957 in Havana, Cuba as Gloria Fajardo García, her family moved to Miami during Gloria's childhood. In America, she spent her adolescence in modest circumstances, but managed to gain an University degree in French and psychology. Her first profession was translator at the Miami International Airport. In 1976 she got married and became mother of two children in 1978 and 1980. Her husband introduced her into his band 'Miami Latin Boys' in 1976, which was renamed to Miami Sound Machine in 1977. The band was not very successful first, which changed by a major record deal with Discos CBS International in 1980. It took again 4 years, until the band had its charts breakthrough in 1984 with the title "Dr.Beat". This was followed by a huge success within the 1980's by numerous hits from numerous hit albums. She went first solo in 1989, but still with the Miami Sound Machine as a backing band. This first era of international success ended on March 20th, 1990, when Gloria had a severe car crash, which took her into a long phase of regeneration, until she was active again in 1991, when she released her crash-inspired album "Into the Light". Starting in 1993, her career split by a number of Latin albums. This brought her huge success in the Latin community in America on the one hand, on the other hand she couldn't reach the same level of success in the rest of the world. In the 1990's she also started an alternative career on movies (e.g. in Wes Craven's "Music of the Heart" with Meryl Streep and she began to write children's books. After 2001, her activity on music releases weakened, as she turned to other activities with her husband Emilio Estefan, Jr.. Together they run 7 restaurants, 2 hotels and they possess shares of the Miami football team "Miami Dolphins".