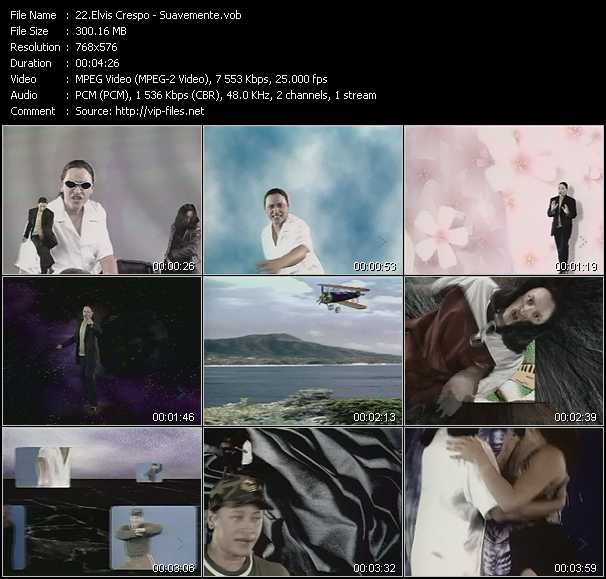 Other Latin-Music Videos of Elvis Crespo

Elvis Crespo Díaz born on July 30, 1971 in New York City, USA; named after the legendary Elvis Presley. His early years spent in Puerto Rico until coming back to the United States as a 17 year old youth. He immediately began cultivating his musical skill set with talented Latin Artists of the day Willie Berrios, Leny Peréz and Toño Rosario. In 1994 his career took off when he joined Grupo Manía replacing Edwin Serrano (2). This opportunity gave Elvis Crespo time to fine tune his craft; until his departure in 1997; this is when he took on a solo career. His debut album Elvis Crespo - Suavemente the following year; fast tracked his career as a front runner in the Latin community; winning him his first Latin Grammy for Tropical Latin Album of the Year. Since then he has released worldwide over a dozen new albums and a variety of compilations including a remix album and a live album recorded in Las Vegas, USA. His collaborations with artists Ilegales, Pitbull, Olga Tañón, Khriz Y Angel, Maffio Alkatraks, Gizelle D'Cole and Fanny Lu; amongst many others; has kept his name on the charts. He also catapulted new group formations such as Zone D' Tambora and Bachata Heightz. In 2009, he married his long time manager Maribel Vega and soon thereafter had their first daughter.