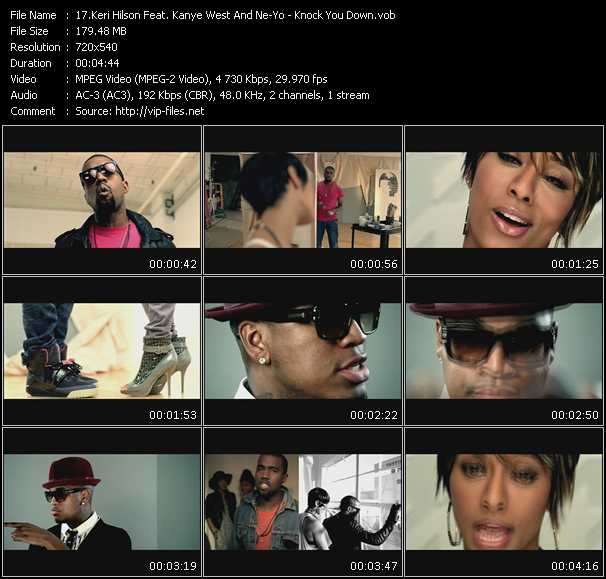 Knock You Down
MPEG-2 video VOB

Kanye Omari West (born June 8, 1977) is an American rapper, singer, songwriter, record producer, director, entrepreneur, and fashion designer. He first gained prominence as a producer for Roc-A-Fella Records; he achieved recognition for his work on rapper Jay-Z's The Blueprint, as well as hit singles for musical artists including Alicia Keys, Ludacris, and Janet Jackson. His style of production originally used high-pitched vocal samples from soul songs incorporated with his own drums and instruments. He later broadened his influences to include 1970s R&B, baroque pop, trip hop, arena rock, house, folk, alternative, electronica, synthpop, industrial, and classical music. West released his debut album The College Dropout in 2004 to commercial and critical acclaim and followed up with number of successful albums. He is one of the world's best-selling artists of all time, having sold more than 21 million albums and 66 million digital downloads. He has won a total of 21 Grammy Awards, making him one of the most awarded artists of all-time.

Born: October 27, 1982, Atlanta, Georgia Born and raised in Decatur, Georgia, Keri Hilson began writing her own music before the age of 12. As a writer, she was mentored under producer Anthony Dent. It was he who produced Keri's first writing debut "Jump" for a female artist on Sony Japan. After catching the eye of acclaimed producer Timbaland, then with Polow's orchestration, singer/songwriter Keri Hilson signed to Interscope Records in early 2005. Since then, Keri has been establishing her signature as an R&B, hip-hop writer and artist, gaining respect and spreading a buzz throughout the music community. She is credited for writing for The Pussycat Dolls, Usher, Danity Kane, Mary J. Blige, Omarion, Ciara, Chris Brown and many other artists... She will release her debut album on Timbaland's joint-venture label, Mosley Music Group (MMG).