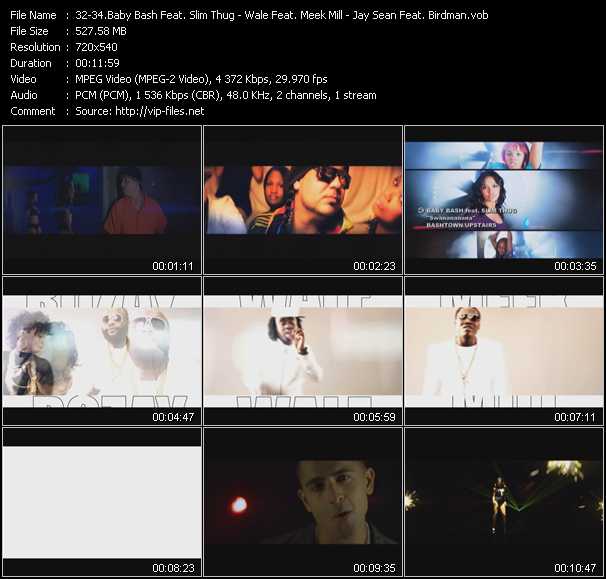 Other Latin-Music Videos of Baby Bash

Baby Bash or Baby Beesh (real name: Ronnie Ray Bryant) (born on October 18, 1975 in Vallejo, California, USA) is a Mexican-American rapper. Baby Bash grew up with his Latin side of the family. His Mexican mother and Anglo-American father both went to prison when Bash was young, resulting in little contact with them. Growing up, his uncles and grandmother exposed him to many different types of musical genres. He also worked with the late Mac Dre. Baby Bash's career began to rise when he went to Houston, Texas, where he met fellow rapper South Park Mexican. Thus, he decided to re-locate there. Prior to his success as a solo artist he was part of rap groups Potna Deuce, Latino Velvet and N2DEEP. Bash's debut album entitled Savage Dreams was released on the independent label Dope House Records in 2001. The acclaim he received soon caught the attention of Universal Records, who signed him later that year. In 2003, Baby Bash released his first album on a major label, Tha Smokin' Nephew, and Super Saucy in 2005. He recently was featured in Paula DeAnda's first single "Doin' Too Much" from her debut album Paula DeAnda. On June 26th, 2007, actor Shia LaBeouf started a beef with Baby Bash on San Diego radio station KHTS-FM Channel 933.

Stayve Jerome Thomas (born September 8, 1980),better known as Slim Thug, is an American rapper. He gained mainstream attention for his contribution to the popular single from rapper Mike Jones, "Still Tippin'". Slim Thug grew up in Houston's Northside neighborhood of Homestead/Scenic Woods. Slim says that his rap name came from the fact that as a teenager, he was very tall and lanky before he filled out. He stands 6'6" tall. The Thug part comes from people's assumptions of him due to his cornrows and sunglasses.At age 17, he performed freestyle raps at local high school parties. He began his rap career with Swishahouse in the late 1990s. After realizing how much money he could make distributing his own mixtapes, he parted ways with Swishahouse on good terms and formed his own independent label, Boss Hogg Outlawz. Thomas bought two record stores and worked in real estate.

British vocalist and recording artist. Born: 26 March 1979 in Harlesden, London, England, UK. Sean is a British asian pop singer-songwriter, best known for his hits "Stolen", "Eyes On You", "Ride It", and "Tonight". He also released two albums, "Me Against Myself" and "My Own Way". First coming to prominence as member of the Rishi Rich Project on single "Dance With You", which reached number 12 on the UK Singles Chart, he was then signed by Virgin Records, before leaving to found his own independent label Jayded Records in 2006. He has also featured on other artists projects, been active in the community doing events for various charities and events, and received several awards for his recording career.

Robert Rihmeek Williams (born May 6, 1987), better known by his stage name Meek Mill, is an American rapper and songwriter from Philadelphia, Pennsylvania. He was briefly signed to Atlanta-based record label Grand Hustle, owned by record executive and American rapper T.I.. In 2011, after leaving Grand Hustle, Mill signed a record deal with fellow American rapper Rick Ross' Miami-based Maybach Music Group. After several self-released mixtapes, he released his debut studio album, Dreams And Nightmares, in 2012. His second album, Dreams Worth More Than Money, was released in 2015. DWMTN became Mill's first album to debut at number-one on the Billboard 200.

Bryan Christopher Williams (born Bryan Christopher Brooks; February 15, 1969), known by his stage name Birdman (also known as Baby), is an American rapper, record executive and entrepreneur. He is the co-founder and public face of Cash Money Records which he founded with his older brother Ronald "Slim" Williams in 1991. Birdman released his eponymous debut album in 2002, and has gone on to release four solo studio albums in total. Aside from his solo career, he is also a member of the hip-hop duo Big Tymers, along with producer Mannie Fresh. Along with his solo work and numerous releases with the Big Tymers, Birdman has released a collaboration album and numerous tracks with fellow rapper and protégé Lil Wayne, whom he discovered and took under his wing at an early age. Birdman has also made his name by contributing to the making of YMCMB (Young Money Cash Money Billionaires), a combination of the former's "Cash Money" and Lil Wayne's Young Money Entertainment imprint under the label. Birdman has also founded the project and hip hop supergroup Rich Gang, bringing attention to artists such as Young Thug and Rich Homie Quan.