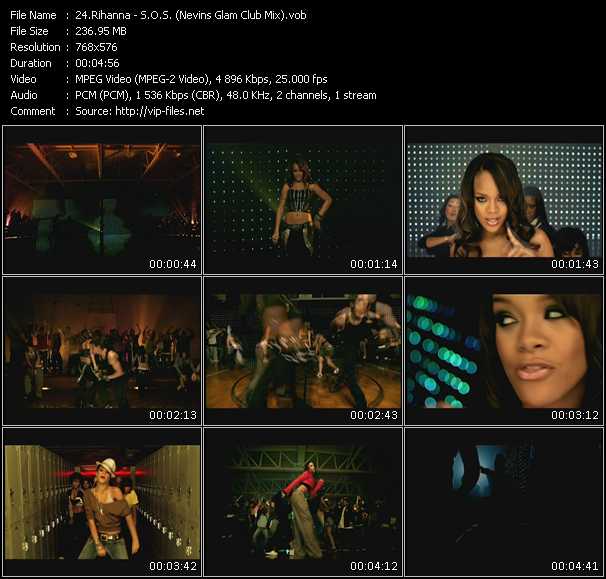 Other Latin-Music Videos of Rihanna

Rihanna Feat. David Bisbal video Hate That I Love You

Robyn Rihanna Fenty (born February 20, 1988), known by her stage name Rihanna, is a Barbadian recording artist, actress and fashion designer. Born in Saint Michael, Barbados, she began her career as a result of meeting record producer Evan Rogers in late 2003. At age 16, she moved to the United States to pursue a recording career and began recording demo tapes under Rogers' guidance, subsequently signing a contract with Def Jam Recordings after auditioning for Jay-Z. Rihanna's debut studio album, Music of the Sun, peaked at number ten on the Billboard 200 and features the Billboard Hot 100 top five hit single "Pon de Replay". Her second album, A Girl Like Me, peaked at number five in the United States, and produced her first Hot 100 number one single, "SOS". Rihanna's third album, Good Girl Gone Bad, spawned the international hit singles "Umbrella", "Don't Stop the Music", "Take a Bow", and "Disturbia". The album was nominated for nine Grammy Awards, winning Best Rap/Sung Collaboration for "Umbrella". Her fourth album, Rated R, produced the top ten singles "Russian Roulette", "Hard", and "Rude Boy", with the latter achieving the number one spot on the Billboard Hot 100. Rihanna's fifth album, Loud, spawned the number one hit singles "Only Girl (In the World)", "What's My Name?", and "S&M". Her sixth album, Talk That Talk, served the worldwide chart topper "We Found Love" and the top five single "Where Have You Been". Rihanna's seventh album, Unapologetic, was preceded by the lead single "Diamonds", which became Rihanna's twelfth number one on the Billboard Hot 100. Rihanna's work has earned her numerous awards and accolades, including seven Grammy Awards, five American Music Awards, eighteen Billboard Music Awards and two BRIT Awards. In 2012, Rihanna was awarded by her label, Def Jam, for selling 25 million records worldwide and 75 million singles, since the beginning of her career in 2005, which makes her one of the best-selling artists of all time. She has achieved a total of twelve number one singles on the Billboard Hot 100 chart, becoming the youngest solo artist to achieve the feat. Billboard named Rihanna the Digital Songs Artist of the 2000s decade, and ranked her as the seventeenth overall artist of the same decade. In 2012, Forbes ranked her as the fourth most powerful celebrity of 2012 with earnings of $53 million between May 2011 and May 2012. The same year, American magazine Time named Rihanna one of the most influential people in the world. Rihanna has a Lyric contralto vocal type. Vocal Range: 3 octaves 2 notes (B2-D6)