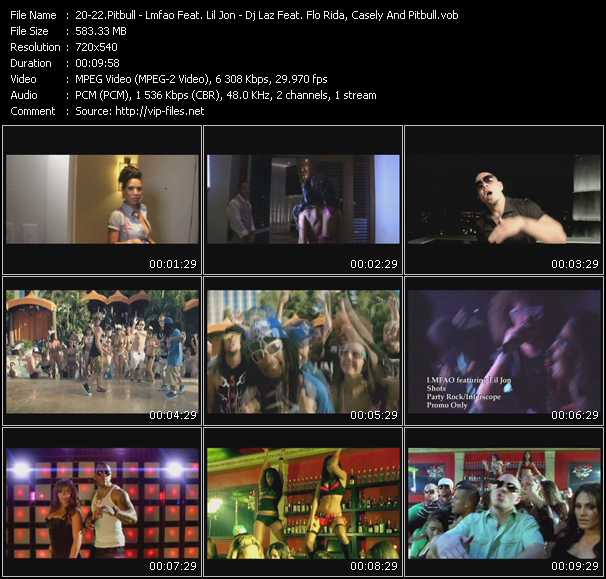 Other Latin-Music Videos of Pitbull

Pitbull Feat. Ne-Yo, Afrojack And Nayer video Give Me Everything

Usher Feat. Pitbull video Dj Got Us Fallin' In Love

Armando Cristian Pérez (born January 15, 1981), better known by his stage name Pitbull, is an American rapper, songwriter, actor and record producer. His first major appearance was on the Lil Jon album Kings Of Crunk in 2002. In 2004, he released his debut album titled M.I.A.M.I. (short for Money Is A Major Issue) under TVT Records. He followed with El Mariel in 2006 and The Boatlift in 2007. He then signed with RCA Records and released Rebelution. Planet Pit followed in 2009.

LMFAO is a US American eurodance duo that formed in 2006 in Los Angeles, California, consisting of rappers and DJs Redfoo, (Stefan Kendal Gordy, born September 3, 1975) and SkyBlu (Skyler Husten Gordy, born August 23, 1986). They are the son and grandson, respectively, of Motown record label founder Berry Gordy, making them uncle and nephew. Their music incorporates a theme of partying and drinking, and the group commonly refers to their music style as "party rock." The name LMFAO is the acronym for "Laughing My Fucking Ass Off" and is pronounced as letter by letter.