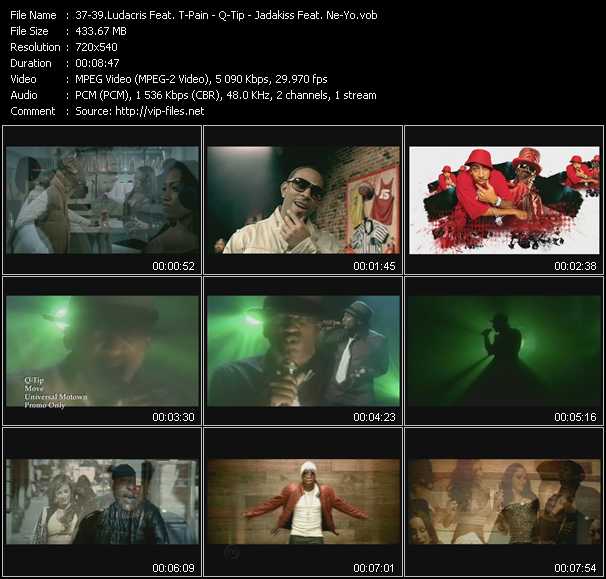 One More Drink - Move - By My Side
MPEG-2 video VOB

Other Latin-Music Videos of Ludacris

Born: 10 April 1970, NYC, USA. In the mid-1990s he converted to Islam and changed his name from Jonathan Davis to Kamaal Ibn John Fareed. Described by fellow Quest member, Jarobi as the "Leader" on A Tribe Called Quest's debut album, Q-Tip is now considered as one of the leaders in the rap game. He helped pioneer a positive hip-hop movement as part of the native tongues and has made it his duty to help and provide direction for some of the most talented artists over the years, such as Busta Rhymes, Consequence, Nas, Mobb Deep, The UN (2). Q-Tip has three unreleased albums, two with DreamWorks Records and one "Abstractions" with Arista. He has released two solo albums to date. In 2006 Q-Tip rejoined fellow members of A Tribe Called Quest and went on a sellout tour of the USA, Mexico and Canada.

Christopher Brian Bridges (born September 11, 1977), better known by his stage name Ludacris, is an American rapper and actor. Along with his manager, Chaka Zulu, Ludacris is the co-founder of Disturbing Tha Peace, an imprint distributed by Def Jam Recordings. Ludacris has sold 17 million albums in the United States and 24 million records sold worldwide, and he has won the Screen Actors Guild, Critic's Choice, MTV, and Grammy Awards during his career. Born in Champaign, Illinois, of African American and Native American descent. Luda wrote his first rap song at age nine when moving to Atlanta and joined an amateur rap group three years later. He attended Banneker High School in Atlanta, Georgia. From 1998 to 1999, and studied music management at Georgia State University. Ludacris worked as a radio editor under the pseudonym "DJ Chris Lova Lova" at Atlanta hip hop station HOT 97.5 FM WHTA, now located at 107.9 FM, when producer and rapper Timbaland made an offer for Ludacris to work with him at the radio station, leading to his performance on the track "Phat Rabbit" on Timbaland's 1998 album Tim's Bio: Life from da Bassment. Ludacris released his major label debut, "Back for the First Time", in October 2000. This album was actually a modified re-release of the album "Incognegro", made in 1998. It was produced with the help of the underground producer Sessy Melia, whom he dated for a short while. The album reached as high as #4 on the U.S. Billboard 200, and was a major success. Ludacris made his mark on the industry with singles such as "Southern Hospitality" and "What's Your Fantasy", along with his first ever single the "Phat Rabbit", from two years prior. Guest appearances included 4-Ize, I-20, Shawnna, Pastor Troy, Timbaland, Trina, Foxy Brown, UGK, and others. Ludacris stated in an interview on MTV's hip hop program Direct Effect that he came up with his stage name based on his "split personality" that he considered "ridiculous" and "ludicrous".