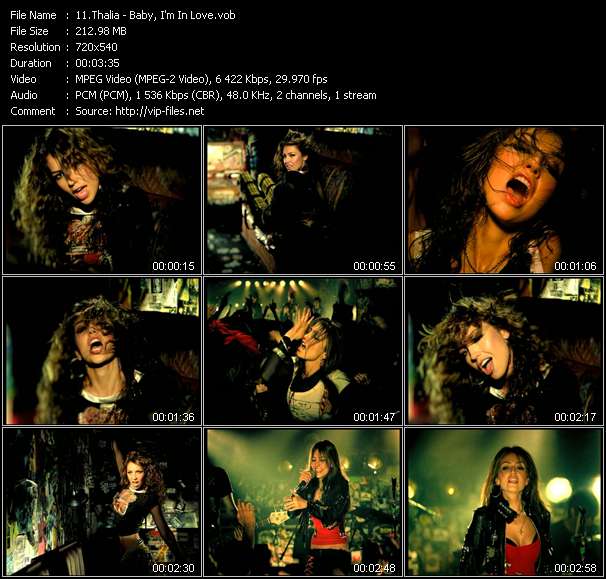 Other Latin-Music Videos of Thalia

Thalia video It's My Party

Thalia began her career at the mere age of nine in the Mexican group Din Din. From there she became a star on a Mexican soap opera, performed "Moderna Chica Del Rock" at the Juguemos A Cantar festival; starred in Vaselina, the Latin version of Grease; and joined the group Timbiriche, but she also had her sights on America. By the '80s, while still a teen, she relocated to Los Angeles where she connected with producer Alfredo Diaz Ordaz. Under the guidance of Diaz Ordaz, Thalia recorded three hit Spanish-language albums in the late '80s and early '90s such as Thalia 1990, Mundo De Cristal and Love (Amor). Her fortunes rose considerably by the mid-'90s when she collaborated with another noted Latin producer, Emilio Estefan Jr. on a trio of albums from 1995-2000 such as En Extasis, Amor A La Mexicana and Arrasando. She was married to music executive Tommy Mottola on December 2, 2000. Since then, she has been living in Connecticut with her husband and their two children, a daughter named Sabrina Sakae and a son named Matthew Alejandro Her self-titled effort "Thalia", released in 2002, included a cover of Dead Or Alive's '80s club hit "You Spin Me Round (Like A Record)," as well as collaborations with producers and songwriters Estefan Jr., Estefano, Steve Morales (Christina Aguilera, Celine Dion, Marc Anthony, Enrique Iglesias), and Cory Roony (Jennifer Lopez, Destiny's Child). In September 2002, Thalia grabbed headlines again, but this was no happy occasion. Her sisters, Laura Zapata and Ernestina Sodi, were kidnapped as they left a Mexico City theater where Zapata was starring in a play. Although both were eventually freed, the ordeal kept Thalia away from Mexico for nearly a year. Flanked by a team of bodyguards, Thalia returned to Mexico in June 2003 to speak out against terrorism. The appearance took place only weeks before the release of her self-titled crossover effort, which again featured collaborations with Rooney and Morales, as well as rapper Fat Joe. She released her next album in 2005 entitled El Sexto Sentido (The Sixth Sense) with her hit singles Amar Sin Ser Amada, Un Alma Sentenciada, Seduccion, Cantando Por Un Sueño, Olividame, No No No and Un Sueño Para Dos (airplay only). There's also a special edition of ESS album entitled "El Sexto Sentido: Re-Loaded" contains an updated songs with a bonus track La Super Chica. She released in 2008 with her 10th and last album Lunada ever released by EMI with her hit singles Ten Paciencia and Será Porque Te Amo. This album was only recorded within 3 days. Although the reviews are well-given by the music critics, the album did not have the expected sales as it did not receive any promotion by Thalía's record company, EMI. For this reason she terminated her contract with EMI after 14 years of international success. She has finally found her new home under her husband's (Tommy Mottola) recording company Sony Music which she recorded her first live studio album Primera Fila (Front Row) in 2009 and her recent 11th studio album (1st album under Sony) entitled "Habitame Siempre (Live in me always)" in 2012 with her hit single Manias. This album made collaborations such as Michael Buble, Robbie Williams and more. It was released with 15 track and there's a rare promo edition 17-track album.